TADA! My very first blog post! For quite some time I have actually been wanting to start a blog, but I have come to realise, that I am not quite certain I lead a life that is interesting enough for me to have a blog.

However, from august 9 until 31 this might change since I will be walking the last 350 kms of Santiago de Camino. I hope to do this in two weeks. But then what about the last week, the clever reader might think? The last week I will be enjoying life in the Northern part of Spain and possible a day or two in France as well. As with this trip in general I will not be planning a lot but will try to follow my gut feeling and instincts more than I normally do. This will probably prove to be a bigger challenge than the actually walk for a control freak such as myself. ;-)

The following weeks until my departure I will write about among other things why I choose to spend my precious vacation walking on dusty roads in Spain and lodging with strangers in less than luxurious (ahem!) hostels. I better start coming up with sound reasons.

A blog without pictures are boring, so I will obviously be posting lots of those along the way. I am guessing that the closer I get to Santiago (and therefore the more exhaustion kicks in) the more pictures and the fewer words I will post. Luckily, a picture says more than a thousand words.

First, a picture of my travelling companion. I will be spending a lot of time with her and I am guessing that I will be hating her at times wishing she would leave me alone, other times hardly notice her but hopefully I will be grateful for her coming along. I just hope she won’t gain too much wait prior to departure. I still haven’t named her, which is close to a crime in my opinion but I haven’t been able to come up with a suitable name. Any ideas among you readers? I would love to hear them and hey, there might be a price to the one with the winning name. 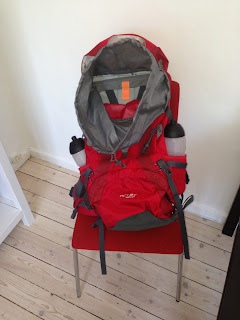 Comfortable footwear is of high importance I have been told and I hope I have found the pair that suits me. I have worn them in and used them in climate and conditions somewhat close to what I will experience in Spain but no matter what I will probably end up with sore feet and blister (although hopefully not too many!) either way but none the less I still tried a lot of various shoes and boots before I finally chose the lucky pair. Below you will find a picture of my shoes. They are not pretty, they were not cheap, they are a size and a half bigger than what I usually wear but they feel comfortable and like the better choice among the rest. I chose shoes instead of boots since I will be walking in august in the blistering heat and since I won’t be climbing in mountains I chose comfort over ankle protection. Knowing my clumsiness I might be a bad choice, though. 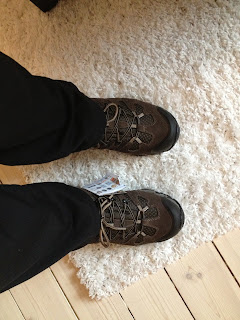 Well, trying out shoes I learned quite a lot. For instance one guy clearly did not listen to ME and MY needs but kept insisting that I should buy boots AND that I should go with boots 3 sizes (!!!) my normal size. And the reason; because that is what HE found comfortable. Erm, ok! I tried on his suggested boots out of politeness and I could hardly lift them or walk in them since they were so big! Needless to say he did not get my money. ;-) Another thing learned: Hikers are very serious people and a comment such as “do they come in pink?” is frowned upon even if it was perfectly clear, that I was joking. And no, they only came in the dreadful brown colour, but after a few days they will probably be grey from all the dust anyways.

Finally a picture about some of the stuff I will be bringing. I will be posting more about this I am certain. And yes, that is a portable sink. Bet you don't own such a thing, eh? 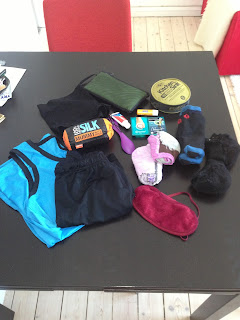 That is all for now. Chapeau if you made it all the way down here!
P.S I promise I will make the design of this blog waaay more interesting. Once I figure out how to do that, that is!﻿
Indsendt af Anita kl. 12.48